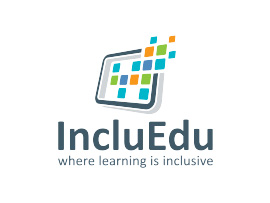 RIX Research and Media was a partner organisation for the three year European project, Inclu Edu, from 2014 -2017. IncluEdu is a strategic partnership of leading European Educators and Researchers who collectively have a unique expertise in the field of ICT and inclusive learning. IncluEdu, with the support of EU project funding, has developed a range of competence based courses that enable European Educators to use tablets and mobile devices to activate and empower their learners.  The courses, which are delivered in a number of major European cities, aim to enable European education organisations to provide more inclusive, personalised education for people with and without special educational needs.

Alongside our tablet courses we have created a lively online community platform where educators can exchange ideas and best practice with like-minded peers from across Europe. They can also access a wide range of learning resources and success stories, from which they can draw inspiration and gain concrete practical skills. Register here to join the community yourself.

Mobile devices such as smartphones or tablets are now commonplace in today´s society and we see a significant increase in their usage in school and adult education. The use of mobile devices radically changes the way we learn through enhanced motivation to learn and new possibilities for personalised and group learning. RIX has developed the best practice model for implementing personalised learning with tablets using person-centred multimedia advocacy approaches and tools.  These approaches empower individuals to take control of their lives, and to communicate and fully engage with their learning.

IncluEdu has designed a range of competence based courses that enable teachers and educators to successfully introduce tablets and mobile ICT into their teaching and learning. Our courses help teachers to become more effective educators who can activate and empower their learners using tablets and mobile devices.

The Association of University Centers on Disabilities (AUCD) in the United States has given its prestigious International Service Award to Andy Minnion MBE, Professor of Media Advocacy at RIX Research & Media; this is the first time that the Award has been given to an individual based outside the US.  The Award recognises outstanding contributions that further programmes or policies designed to create more inclusive communities for people with disabilities and their families throughout the world.  It honours Andy Minnion’s exceptional work in the field of new media and inclusive research, development and knowledge exchange.

The AUCD International Service Award nomination stated:  “Andy works as a researcher, lecturer, workshop leader, and producer of new media. He has been responsible for developing the ‘Multimedia Advocacy’ approach at the RIX Centre, whereby people with disabilities use self-made media to take greater control of their own lives and challenge their social exclusion.  He has led research and knowledge exchange project work in this field since 2001. Andy’s work with RIX draws support from UK and EU research as well as charitable and commercial activity and engages with local and national government policy makers, academia, business and industry, alongside people with intellectual disabilities and their families.”

Professor Andy Minnion said: “I am delighted and deeply honoured to receive this award.  There is so much excellent work being done around the world to drive positive change in the lives of people with learning disabilities and their families.  New media technology is enabling better communication and ever greater levels of self-directed support and I’m incredibly proud of the work that we do at RIX at the forefront of this change.  Since last year, we have been working in partnership with the Westchester Institute for Human Development in New York State as well as the Federal Administration on Community Living, to introduce a Multimedia Approach to self-advocacy for people with intellectual and developmental disabilities to the US.”

Accepting the Award, Andy Minnion highlighted that RIX, based at the University of East London (UEL), shared the values and goals of the 67 University Centres for Excellence in Developmental Disabilities (UCEDDs) across the US that comprise the AUCD network.  RIX and AUCD share the unwavering commitment to person-centred working and the promotion of self-advocacy for people with disabilities that are at the heart of RIX’s approach.  He also drew a parallel between the Kennedy family, which has always championed the cause of people with intellectual and developmental disabilities in the US, and the RIX family in the UK.  Both families include members with intellectual disabilities and have fought for the rights of the people with intellectual disabilities in public and policy circles, in each case helping to build significant changes to attitude and support provision for this community.  President Jack Kennedy first instituted the UCEDDs in 1963 and Lord Brian RIX was instrumental in the establishment of the UK Charity Mencap, as well as the RIX Centre at UEL in the UK.

Andy Minnion has dedicated the Award to Lord Brian RIX, his family and his tireless campaign for people with disabilities in the UK as well as to the dozens of people with intellectual disabilities who have worked with the RIX Research & Media centre at UEL since the work started.

Any cookies that may not be particularly necessary for the website to function and is used specifically to collect user personal data via analytics, ads, other embedded contents are termed as non-necessary cookies. It is mandatory to procure user consent prior to running these cookies on your website.